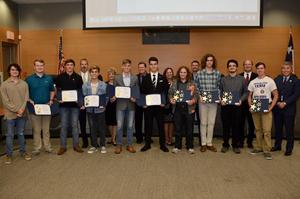 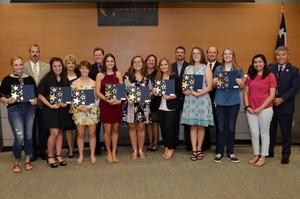 Annually, high school students from across the United States participate in a leadership program designed to teach them about citizenship and government. Students from Comal ISD learned the importance of getting involved at Boys State and Girls State.

The Comal Independent School District had 28 students attend the annual Boys State and Girls State leadership programs this summer. Both groups were recognized during the district’s Board of Trustees’ September meeting.

Sponsored by the American Legion and the American Legion Auxiliary, both Boys State and Girls State give high school students the opportunity to participate in mock local, county, state and federal governments. Students, who are divided into “cities,” are given the responsibilities, duties and privileges bestowed on every American citizen. They are charged with following the U.S. government’s system of electing officials, writing legislation, passing legislation and listening to constituents. At the end of the week, students have a real understanding of how government works and how each citizen plays a part in it.

“Girls State taught me the importance of getting involved in the community,” said Caroline Kuhn, a senior at Smithson Valley High School. “It also taught me how to speak in public in front of about 600 people. It was really terrifying but also a great experience. I found a lot of support from the other participants, and I learned to be brave.”

-Comal ISD students who participated in Boys State this year were recognized at the September meeting of the Comal ISD Board of Trustees.

-Comal ISD students who participated in Girls State this year were recognized at the September meeting of the Comal ISD Board of Trustees.