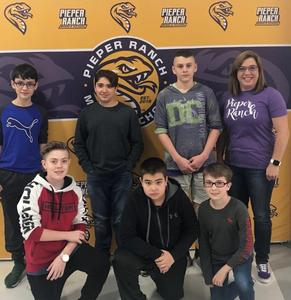 The Pieper Ranch Middle School CyberPatriot team will be recognized at the Mayor's Cyber Cup Awards Luncheon & College Fair March 30, after being named the Rookie Team of the year in the San Antonio area.

In its inaugural year, a Pieper Ranch Middle School CyberPatriot team received a big honor Feb. 22, being named the Rookie Team of the year in the San Antonio area.

The team which is led by first-year Coach Marci Anton, consists of six middle school students, who will be recognized at the 2019 San Antonio Mayor’s Cyber Cup Awards Luncheon & College Fair Saturday, March 30, at the Expo Hall of the Freeman Coliseum.

CyberPatriot is the National Youth Cyber Education Program created by the Air Force Association to inspire kinder through 12th grade students towards careers in cybersecurity or other science, technology, engineering and mathematics disciplines.

Every Comal ISD middle and high school campus sponsors a CyberPatriot’s team or teams, and cyber security classes are taught in each middle school. PRMS is one of the district’s newest middle schools located at 1106 Kinder Parkway, San Antonio.

The CyberTexas Foundation and the San Antonio CyberPatriot Center of Excellence are hosting this year’s Mayor’s Cyber Cup Awards. For the fourth consecutive year, the San Antonio area has the distinction of having the most CyberPatriot teams registered in the nation with 317 teams including more than 90 middle school teams.